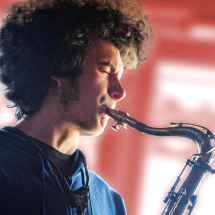 Education: Bachelor’s from Lamont School of Music. Denver School of the Arts and Jeffco Open School.

Ike Spivak is a Downbeat award-winning multi-instrumentalist, composer, educator, and producer from Denver, Colorado. While pursuing an undergraduate degree from the University of Denver, he was honored with first place in the college big band division of the Next Generation Jazz Festival. DU also awarded him with Outstanding Undergraduate Student in Jazz Studies twice.

Ike can be heard playing piano, saxophone, drums, flute, clarinet, and singing on his 2019 release, Intangible Tales. He recorded saxophone on Bob Montgomery’s 2018 album, La Familia, and on an album by Venezuelan bassist, Gonzalo Teppa in 2019. Ike wrote and recorded dozens of songs including four original pieces for big band during his undergrad at the Lamont School of Music.

Though he loves to write and perform, Ike is an active educator who works with the Colorado Conservatory for the Jazz Arts as well as with private students.

His journey began in junior high at Denver School of the Arts where he was exposed to many incredible people. After four years, Ike decided to pursue his high school education at Jefferson County Open School; there he was able to focus on more uniquely personalized goals.

In 2014 and 2015 Ike was selected to join the Telluride Jazz Student All-Stars where he worked under the direction of Bob Montgomery and Joshua Quinlan.

Raised on Denver’s rapidly growing music scene, Ike has enjoyed playing with many world-class performers such as Greg Gizbert, Paul Romaine, Eric Gunnison, and Brad Goode. He has also had the privilege of performing in other parts of the world including Scotland, Italy, Jamaica, and New York City.

Ike leads an adventurous life dedicated to experiencing humanity and authentically projecting it through the creative arts. Through composition and collaboration, he has cultivated a unique voice which allows him to interact with the world in a captivating and thoughtful way.

Bachelor’s from Lamont School of Music. Denver School of the Arts and Jeffco Open School.