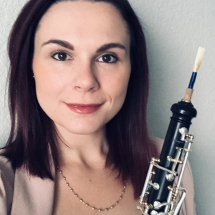 Imogen began her music career when she started piano lessons at the age of 6. She then moved on to learn clarinet, flute, saxophone and oboe, winning principal seats at the National Youth Wind Orchestra of Great Britain and the City of Birmingham Youth Symphony Orchestra at the age of 15.

After making the decision to specialize in oboe and english horn, Imogen began her studies in 2012 at the Royal Northern College of Music in Manchester (UK) with Jonathan Small and Jenny Galloway, after receiving scholarships both from the institution and the Leverhulme Trust. Whilst at the RNCM, she received tuition from a number of prestigious players including Hansjorg Shellenberger, Alex Klein, Melinda Maxwell and Hugh McKenna. In her final year, Imogen was awarded the Evelyn Rothwell Prize for Oboe and the Tim Reynish Prize for Woodwind.

Imogen has always found joy in passing her love of music to others, teaching all woodwind instruments, piano and music theory since the age of 18. Receiving her elementary teaching qualification from The University of Manchester (UK) in 2016, Imogen now has the privilege of dedicating the majority of her professional career to delivering expert instrumental tuition. Several of her students have received music scholarships to conservatories and universities through her expert tutelage.

Imogen is excited to teach and guide Denver’s next generation of musicians!