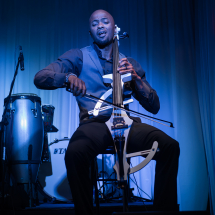 After his primary and secondary studies at the prestigious Nouveau College Bird, Mr Michel emigrated to the US to further his musical studies and was fortunate to graduate from Florida International University with a degree in music education.

He is an emerging artist, an exceptional talent who performs with great charm and grace, locally and internationally (Ireland, France, Portugal just to name a few) and with great artists such as Michel Martelly aka "Sweet Mickey", Marc Antonio Solis, Latin grammy award producer Paul Hoyle and many more. He was also featured twice on the Spanish hit show "Mira Quien Baila" this past September