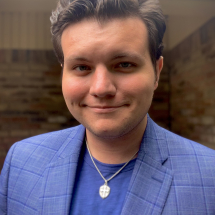 Performer and Vocal Instructor Griffin Camacho is a Graduate of the Meadows School of the Arts at Southern Methodist University with a Bachelor of Music in Voice Performance.

Griffin has performed throughout the nation for the likes of President George W. Bush, President Barack Obama and President Joe Biden. He also performed for the opening of the Winspear Opera House and Wyly Theater in Downtown Dallas, been a soloist with the Dallas Symphony Orchestra and Dallas Winds, and shared stages with Alan Menken and Bruce Willis.

Griffin’s love for the stage has led to roles such as Tevye in Fiddler on the Roof, Shrek in Shrek the Musical, Charlie Brown in You’re a Good Man Charlie Brown, William Barfée in the 25th Annual Putnam County Spelling Bee, Audrey II in Little Shop of Horrors and Counsel for the Plaintiff in Trial by Jury. Throughout his time at SMU, he has also been trained classically, being a part of productions of L’elisir d’amore by Donizetti, Alcina by Handel and Our Town by Rorem.

Griffin aspires to help others find their passion of music through singing and looks forward to meeting the future musicians of our world. In addition to teaching he is also the Giese Music Scholar/Assistant Music Director at St. Andrew’s Presbyterian Church.