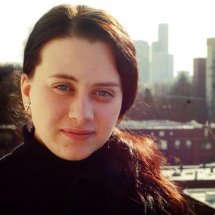 Gretchen Conrad, soprano, is an emerging classical vocalist. She graduated from Cornish College of the Arts in 2014 with a bachelor's degree in classical voice with an emphasis in opera.

While at Cornish, she was engaged for many of the productions there including Laetitia in Gian Carlo Menotti's The Old Maid & The Thief, and 3rd Knitter in Samuel Barab's A Game of Chance. She has also performed and participated in several operas with Stephen Stubbs, including Francesca Caccini's La Liberazione di Ruggerio dall'Isola D'Alcina and John Blow's Venus & Adonis. In Spring 2013, she wrote the script for the Cornish College Opera Workshop's end of the year performance. That same year, she premiered the duet "Wings" with Natalie Lerch for Tom Baker's upcoming opera, Holos. Gretchen was also a member of the Cornish Chamber Singers, which had frequent performances with award-winning local chorale group, the Esoterics.

In 2015, she was a featured soloist for Bach in the Subways and Bach in the Cornish Way festival. In her spare time she enjoys reading and martial arts.