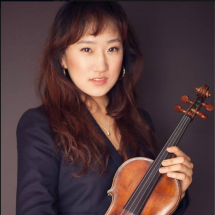 Playing since the age of six, Grace’s passion for music was quickly realized through the violin. With consistent lessons from esteemed instructors such as Kent Coleman, Simon James, and close mentorship with brilliant accompanist, Hiro David, Grace’s modest participation in recitals soon led to competitions local and national. Her success in such ventures claimed her first prizes in state and third in nationals for consecutive years, which also inspired her high school quintet to seize first prize at a state level.

Grace’s dedication and devotion to the instrument led her to pursue a bachelors degree at the renowned Jacobs School of Music at Indiana University, under the tutelage of former concertmaster of Concertcebeouw Orchestra and current concertmaster of Dallas Symphony Alex Kerr and some time with Mimi Zweig, a leading academician of violin pedagogy. Grace developed an adoration of orchestral playing over time which steered her into studying with San Francisco Symphony violinists at the San Francisco Academy Orchestra followed by her masters degree and fellowship program with The Orchestra Now at Bard College. Some of her favorite performance memories include her time at the Aspen Music Festival, Music Academy of the West, New York String Orchestra Seminar, and the Great Mountains International Music Festival in South Korea.

When Grace is not teaching, she enjoys partaking in exclusive gigs such as recording for major movie soundtracks or games and performing with her friends for private events. She uses every opportunity to inspire her music philosophy, not just as a violinist/musician or performer, but as a student just like yourself.

Grace constantly seeks ways to improve in every area of her life, because there is method to everything and because that genius can be applied just about everywhere. She loves jogging and discovering other genres of music, attending live concerts of all types, literature, and frying eggs in the morning. She has lately interested herself with computer programming when her violin is taking a nap!