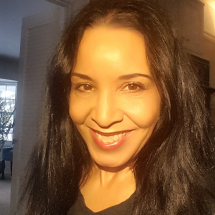 Gail Freeman is a D.C. native and active local musician and educator. She has taught piano and voice for almost 15 years and serves as the Music Director of two local churches. In addition to her teaching and work in sacred music, Gail is also a composer and arranger.

As a child, Gail was immersed in the world of music. She grew up performing in renowned venues, like the Apollo Theater in New York, the Howard Theatre in D.C., and the Civic Center in Baltimore. She began piano lessons at the age of 4 and it was quickly discovered that she had an ear for music. Even at a young age, she could pick out melody lines by ear on the piano, and she continued her music education throughout childhood. Her early instructor was Mary Lacy Moore, and with her, Gail studied both Classical and Sacred Music.

Into her teen years and early adulthood, Gail also began singing with a group that traveled and performed, as well as choirs. She found a love for the stage and even went on to play keyboards with bands in a secular setting. Throughout her performance career, Gail played in both secular and sacred venues frequently.

Music was a natural career pursuit as Gail went onto higher learning and her years in college, and she attended Howard University to earn her Bachelors Degree in Music. She received the honored distinction of being the first female admitted to the newly formed Jazz Studies program at Howard University, and she studied with the late John Malichi. It was there that Gail learned to solo, improvise, and express her creativity through music with a refined set of tools. Gail also completed a year of the Jazz Studies graduate program at Howard University and studied piano and voice with Cyrus Chestnut and Professor C. Miller, who formed the famous Afro Blue jazz vocal group.

Gail also has experienced commercial success in music and was a recording artist for several major labels, including Atlantic Records. One of her songs reached #25 of the Top 100 Billboard chart.
For the past 15 years, Gail has served as a music instructor and choir director of a Washington, D.C. high school and focused much of her effort on teaching students in the school how to play piano by ear and with sheet music, so they can enjoy the same creative outlet she holds so dear. She taught music theory and choral music and wrote the curriculum for the school’s Digital Music course. Gail is very proud and honored to have worked with her students at the school, and as a teacher, she has helped several students go on to major and minor in music when going on to college.

Throughout her career as a school instructor, Gail also served as a private music instructor specializing in piano and voice. She teaches with a traditional, classical focus, but she places a lot of emphasis on teaching improvisation and ear training from the beginning of study. Gail believes that the “greatest good” people can do is pass on what they know to all they meet, and in her life, Gail feels that passing on her gift for music is her purpose and blessing.