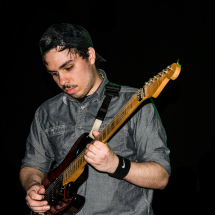 Education: Cornish College of the Arts

As a teacher, Gabriel Brooks-Lopez strives to balance learning to enjoy the art of music with the technical aspects of understanding your instrument and musical concepts. He takes a very personalized approach to his students. “Because every student is unique, the approach to teaching needs to suit their individual character.” Gabe goes beyond teaching songs and makes sure his students have a solid musical understanding that can remain useful even if they move on into a very different realm of music.

Gabriel began his path into music at the age of seven and picked up his first guitar two years later. Early in life he became comfortable on a multitude of instruments from strings to brass to percussion. Growing up here in Washington state Gabe found his way into every school music program he could access while also pursuing his music education on his own terms. Gabe attended Cornish College of the Arts and graduated with a Bachelor of Music in Composition.

Gabriel has been a part of the Seattle music scene for several years. In his primary act, the Mukilteo based, progressive metal group Esoson, he plays guitar and is the chief composer and arranger for the group. He also filled the role of drummer and co-composer beside Max Walker of the Seattle local jazz/hip-hop group Cavalerie. His work is also showcased through his guitar centric, metal jazz fusion compositions under his own name. Gabe has played in many Seattle venues such as PONCHO Concert Hall, El Corazon, Studio 7, and Tony V’s Garage. In 2011 Gabe participated in a competitive drum and bugle corps, The Oregon Crusaders, where he toured the United States that culminated in a second place finish among the best groups internationally. On top of his playing, Gabe is a working audio engineer who has worked with many west coast musicians primarily as a recording and mixing engineer.


Cornish College of the Arts