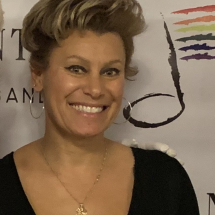 Fayliza Horton has a pure love of music that has always been a major part of her life!
Starting from a young age, she played piano, guitar, and flute, then went on to excel in flute performance.

In her early years, Ms. Horton performed with the Oakland Youth Orchestra (OYO) and the Young People's Symphony Orchestra in middle and high school. As a member of OYO, Fayliza participated in the world competition held in Austria and toured with the group throughout Germany and Austria performing at a variety of venues. OYO came in second place.

Fayliza attended UCLA and graduated with a major in psychobiology and a minor in music. Performing with the solid gold sound of the UCLA Marching band, she was the flute section leader for three years, one of which included a Rose Bowl appearance and a solo at the Rose Bowl for a tribute to John Williams.

After university, Fayliza continued her performances with community theater groups performing Elton John's Aida, Beauty and the Beast, and Cabaret.
She then went on to earn a Master's degree in Education. She holds 2 teaching credentials, one in English and the other in multiple subjects. Recently, she has been performing with marching bands and served on the board for both the Charlotte Pride Band and the Atlanta Freedom Bands.

After teaching for 12 years in the US and abroad, Fayliza decided to delve into the tech world, and worked for Apple for 3 years. She then became a Business Analyst and Project Manager doing contract work. She has decided to pursue her passion full time and is excited to be with LIYH!

"Music is my passion." The phrase you will hear from Fayliza most often when speaking to her. She is dedicated to spreading joy through music and ensuring that all people have access to the arts.