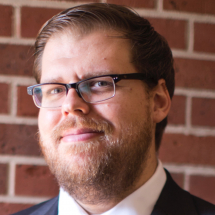 Dr. Evan Meier is a composer living in Maryland. Born in Long Beach, CA he began his musical studies at an early age, performing on piano, French horn, trumpet, and steel drums. He wrote his first compositions for PanDrumonium - his middle-school steel drum ensemble. Later on, in high school, he continued to perform, in additional to writing songs and arrangements for various rock bands and jazz ensembles. While pursuing his undergraduate degree, Evan decided to focus on classical composition - in 2007 he received his B.M. in music composition from Chapman University in California. During this time he also studied piano under the tutelage of Karen Knecht. He went on to receive his M.M. in music composition from California State University, Northridge (CSUN) and his D.M.A in music composition from the University of Maryland.

Evan's compositions have been featured in performances by the Aspen Contemporary Ensemble, the Great Noise Ensemble, the Capital City Symphony, the Nimbus Ensemble, Nicholas Photinos of eighth blackbird, Paperwing, the Calyx Quartet, the University of Maryland Percussion Ensemble, the Youth Orchestra of Prince William County, the Mclean Youth Orchestra, and the Chapman University Wind Ensemble. Meier's Fire Music was selected for the Minnesota Orchestra's 2015 Composers Institute, and performed as part of the Future Classics program, with Osmo Vänskä conducting. Opera has been a major focus of Meier's compositional output. His one-act chamber opera, The Last Act of Revolution, was presented by New York City Opera's VOX Festival in the fall of 2012; it was premiered earlier that year by the University of Maryland Opera Studio. The New York Times described the opera as having "a very polished feel...the music firmly rooted in the drama." Since 2013, Meier has served as a resident artist with the American Lyric Theater, as part of the Composer/Librettist Development Program. In the spring of 2014, ALT presented his one-act chamber opera, The Resurrection Engine, which was written in collaboration with librettist and playwright E.M. Lewis. Meier and Lewis are currently at work on a family-friendly opera, Sherlock Holmes and the Case of the Fallen Giant, which has been commissioned by ALT.