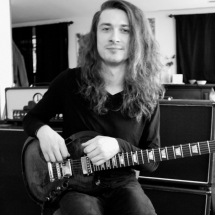 Evan is a dedicated musician whose thirst for a deeper understanding of music is never satisfied. Surrounded by music and musical instruments from a young age, he quickly took to drums and percussion and later, guitar and music theory. By his teenage years he was taking music very seriously, studying with many local instructors, playing with as many other musicians as he could find, and going to open jam nights to further his performing experience. He would go on to study guitar, music theory, and drums with not only local instructors, with 40 – 50 years of experience in the music and teaching industry, but also with world renown session and working musicians. Throughout his early 20’s he gained as much real world experience as he could, touring all over the U.S. multiple times, composing and recording full length albums as well as playing on other musician’s albums as a session musician.

Still an active performing musician, Evan also enjoys sharing his knowledge of music with others as well as constantly furthering his own. He believes that music theory is an important part of learning an instrument therefore understanding the why as well as the how. He looks to inspire, encourage, motivate, and present the proper tools for any aspiring musician to further their personal goals in their very own musical journey.