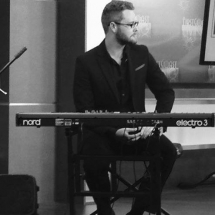 Erik began his life as a musician at the early age of four years old. Having two parents who are life-long professional musicians helped that decision. Piano was the natural choice for him since young Erik would hide his favorite toys underneath the instrument anyway. The piano lessons continued from the age of four, through elementary, middle, high school, and college as a jazz studies major. Outside of the lessons Erik was performing jazz and classical music professionally with his mother and father from the age of 15. This is also about the time Erik began playing Jazz Organ and Vibraphone professionally.

The gift of music has always been the driving force behind Erik through his whole life. Traveling the world as a performer has given him unique insight into the importance of a strong educational foundation. Some of his previous teachers and mentors include Mike Gerber, Lynne Arriale, Jack Keller, and Gail Smith. Each one of those teachers over the years helped Erik to grow not only musically, but showed him how to make music into a life-long career. Erik attended Miami Dade College and the University of North Florida and in that time received multiple scholarships and awards for outstanding musicianship. He also was a member of the 2011 Disneyland All American College Band where in one summer in California, he had the honor of sharing the stage with such Jazz icons as John Clayton, Arturo Sandoval, Greg Field, and Sal Lozano. Erik has performed in many Jazz festivals in Florida, Georgia, Canada and Poland.

Currently Erik's largest musical focus is as a member of the Fabulous Equinox Orchestra, an 18 piece Jazz Big Band that tours and plays extensively all over the country and internationally. Erik became a teacher to pass on his knowledge and experience to students because "There simply aren't enough teachers with real performing experience outside of the College world to help inspire kids to put in the hard work and to most importantly, MAKE GREAT MUSIC". Through a good understanding of instrumental fundamentals, theory, ear training, and setting achievable goals one lesson at a time, a student can make the leap from knowing a couple tunes to show off at family gatherings, to getting on stage and changing the face of the world of music forever.