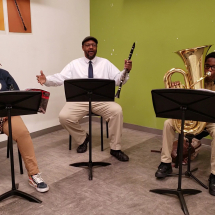 Eric Henderson is a music educator with over 10 years of teaching experience working for both charter and public schools in Washington, DC. Eric specializes in brass, woodwind, and percussion instruments and was responsible for teaching music as part of the school’s curriculum.

Eric creates an enjoyable learning environment and seeks to inspire young minds and help them grow an appreciation for music. Eric also has planned and created various concerts and after-school music programs for student participation respectively.

Eric was born and raised in Washington, DC. where attended public schools and learned to play the tuba starting in the 7th grade. He then attended Howard University where he performed with the marching, concert, and jazz bands and various smaller ensembles and where he received his bachelor’s and master’s degrees in Music Education. He later taught in the District of Columbia Public School system where he received his teaching certificate. Eric is a member of the Zeta Iota Chapter of Phi Mu Alpha Sinfonia Fraternity, the Eta Omega Chapter of Kappa Kappa Psi National Honorary Band Fraternity, and the Alpha Omega Chapter of Omega Psi Phi Fraternity.

Throughout his teaching career, Eric strives to be a passionate and motivating force for his students and uses his positive attitude and tireless energy to encourage them to work hard and succeed. He knows there is no single approach that works for everyone, so he continues to educate himself on emerging trends of music education to provide the most comprehensive method that works for each of his student’s individual needs.