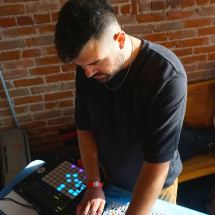 Eric Estrada a multi-instrumentalist specializing in trumpet and piano, based in the Denver Metro area. Eric received a Bachelor of Arts degree from Metropolitan State University of Denver in Jazz and American Improvised Music with an emphasis in trumpet performance.

Eric began his musical journey at the age of 8 playing the trumpet. He went on to participate in honor bands in middle school and high school, being chosen to be a part of the Colorado All-State jazz band, and receiving the Louis Armstrong award his senior year of high school. Playing in local mariachi groups in his hometown, Eric also picked up piano and guitar along the way.

After graduating from MSU-Denver, Eric went on to perform and tour around the United States playing trumpet in Denver group, The Gueslist. More recently, his goal is to expand his musical path playing keyboard synthesizers in experimental jazz-hop quartet, Ramakhandra. Releasing their debut self titled album summer of 2020, Ramakhandra has had the honor of sharing stages with many international touring acts.

Eric looks forward to sharing his love and passion for music in an educational setting.