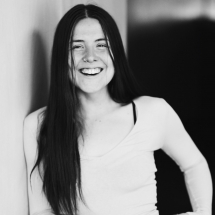 Throughout the transient nature of life, music has the power to ground us, make us feel safe and at home when we are in the midst of chaos. Studying music teaches us a plethora of valuable lessons that can be applied in all facets of life. This inherent bond and connection is what Emily looks to enrich in her students.

A graduate of the jazz composition department at Berklee College of Music, Emily's musical background is expansive and eclectic. She began playing cello when she was 5 years old and was singing in choirs from the age of 6. Born and raised in Portland Oregon into a family of professional musicians, Emily additionally studied piano, violin, marimba, as well as teaching herself guitar and bass. In college she began to delve into the intricacies of theory and composition, learning to write for a wide range of ensembles and styles. It was at Berklee that Emily became a recipient of the Daniel Pearl Memorial Cello. Notable teachers and mentors include Eugene Friesen, Lisa Thorson, Ezra Weiss, Laurie Monahan, Ayn Inserto and Greg Hopkins.

As a performer and composer Emily's rich combination of voice and cello is breaking new ground in the world of chamber jazz. Her diverse range of influences has shaped her music into a unique style that plays with the juxtaposition of tradition and innovation. Bryan's performance experience began in musical theatre as a child, and by the age of fifteen had received critical acclaim for her appearance as the Cheshire Cat in the world premier of Ezra Weiss's rendition of Alice in Wonderland. In 2009 she appeared playing cello in Gus Van Sants' movie, Restless.

Emily has a holistic approach to music education, believing that the understanding of your instrument will cease to flourish if you are not also a student of music as a whole. Her background in yoga helps her to promote habits that aid musical exploration and prevent injury. Through critical thinking, exploration, creativity and curiosity, she works to spark excitement and love for learning that will continue to flourish past music lessons.