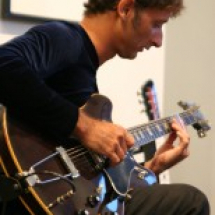 His first string instrument, a toy sitar, was given as a gift at the age of three. Eduardo Balerdi then studied music under the method of Ana Lucia Frega, an innovative music pedagogue from the 1960's, in elementary school. He took guitar classes at school and privately with his aunt from the age of five.

Eduardo studied classical guitar, rock guitar, and composition as a teenager with Eduardo Criscuolo, then jazz guitar, ensemble and jazz composition with Alejandro Moro and Marta Bellomo. Followed by contemporary composition and strict counterpoint with Daniel Montes. He is a fan of many guitarists, composers and performers from different fields including Rock, Jazz, R&B, Classical, Pop, Hip-Hop and more.

Eduardo began performing at an early age, appearing on television and radio with various bands. From 2002 to 2003, he was a guitar player for the popular band Proyecto Verona. He is also currently performing with UOM, a regular act in the arts circuit of Miami. He has continued to compose original music for MTV, Nickelodeon, VH1, National Geographic and FX among other broadcasters since 1998.

Eduardo has an open ear to what is happening now. He knows the emergence of new figures in music and actively continues to seek more information. From underground to mainstream, from traditional to modern and beyond.

Eduardo has devoted his life to music by performing and teaching. He has worked in the field of Music Education for several years encouraging his students, from elementary to high school, to develop a taste, a pleasure and a respect for music. He respects all kinds of music and deeply believes that every point of view merits to be respected and valued, and that every music style can be added to the education process.