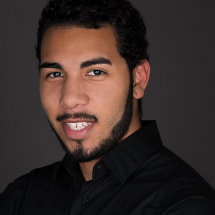 Eddy Juvier is a Cuban-American vocal performer and music educator originally from Miami, Florida who envisions sharing the nuance of Latin American cultures with Mainstream America through music that embodies Joyful Living and Welcoming Inclusivity. Mr. Juvier’s goal is to build empathy and understanding between these communities through his music. He believes when hatred clouds the hearts of humans around the world, music shall be the hero that brings love and understanding into their hearts and minds.

Mr. Juvier is a 2nd generation immigrant from Cuban and Nicaraguan parents. Creativity came naturally to Mr. Juvier: his early adolescence was filled with love for the arts, especially poetry and songwriting. Inevitably, music was the art form that entrapped him, and he started playing saxophone at age 10. He spent most of his childhood in Miami, but was able to travel and live in European countries because of his mother’s job in the military. There, he was exposed to classical music and began singing in choir at age 14. During this time abroad, he also connected with a diverse group of military kids from all parts of the United States. His connection with both Latin-American culture and pop culture is what drives Juvier to bridge the divide between these two communities.

Mr. Juvier is in his 4th year of study for his Bachelor’s Degree in Vocal Performance and Music Education at the University of North Texas. He works with his voice teacher, Dr. Stephen Morscheck, to gain fluency and understanding of how to correctly use his voice healthily in all styles of music, and he shares that knowledge with his students. These performance skills also help him succeed in UNT’s A Capella Choir (directed by Dr. Allen Hightower), as well as in operatic roles, such as The Badger in The Cunning Little Vixen and Betto in Gianni Schicchi.

In his spare time, Juvier enjoys photography and writing poetry, as well as playing video games on his PS4 and watching new anime on CrunchyRoll. Balancing work and freetime is essential to staying motivated and achieving your goals. The things we strive for shape the people we will become. Mr. Juvier’s ultimate goal is to help build a world where music helps overcome cultural divisions, and allows communication and understanding to flow between different communities.