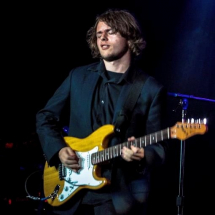 Dylan Welsh is a diverse player, writer, and engineer who is adaptable and ready for anything. In addition to performing, he teaches Guitar, Viola, and Violin lessons in Seattle, WA.

Specializing in both guitar and viola, Welsh comes from a diverse background of classical repertoire and precision mixed with rock sensibilities, diversified by his studies of jazz and world music at Berklee College of Music. As a published journalist, he also has his pulse on the industry at all times, keeping up with current sounds while studying and taking influence from the classics.

Welsh grew up in Seattle, WA, and while he was studying viola in school, he began cutting his teeth in local cover bands with other teenagers at age thirteen. By the time he was sixteen, he had already played at some of the Northwest’s largest festivals, participated in two tours of the Midwest, and was the youngest player to have ever been accepted into the Seattle Rock Orchestra (at the request of founder Scott Teske himself).

While Welsh specializes in guitar and viola, he is an accomplished multi-instrumentalist, having played drum set, mandolin, keyboard, bass guitar, and sang in many bands in Seattle. By using the skills he has learned while studying these instruments, he has been able to develop a deep understanding of the ensemble structure and how to play in it (or write for it). His influences span all genres and instruments, especially ones that cater to his love for harmony and songcraft. Some of his favorites include Joni Mitchell, Claude Debussy, Stevie Wonder, John Coltrane, Chick Corea, Frank Zappa, and Robert Fripp.