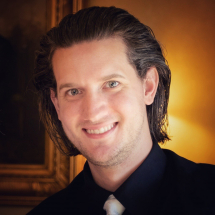 Born and raised in southeastern Michigan, Devin has had a substantial musical journey. He's written dozens of songs, performed for thousands of people and committed his career path to music. When Devin joined his brother's band, he found that he had a knack for writing music and not just playing music. He soon became the main songwriter and arranger in the band sparking his interest in music production. In 2006 they started to record their first full length album at one of the most established recording studios in Michigan. Devin fell in love with the whole process of producing a song shadowing the recording and mixing engineer closely every step of the way. He decided that he wanted to be able to record and mix his own songs, so he enrolled in the audio production program at Full Sail University located in Winter Park, Florida. He received his associate degree focused on sound and audio engineering but wanted to learn more, so he enrolled in their music production program and received his bachelor degree with a focus on songwriting and music theory.

Devin started writing, recording and performing his own songs as a solo artist. He was eventually noticed by a group called the Stand Strength Team. This was a unique group that put-on assemblies at K-12 schools in the most impoverished and needed areas of the US focusing on inspiration and motivation with an anti-bullying message. They asked Devin to perform songs with a positive message for students to open the assemblies. They also performed at music festivals, churches and community centers around the country. They also spend weeks at a time as the special guests at summer camps. Devin would teach music classes for the kids at these camps during the day and get them ready to perform a song with him on stage at the end of the week.

Devin currently resides in central Florida working as a freelance music producer coaching various artists and bands to bring out their full potential. Devin is a very patient and understanding soul. He knows that everyone learns at a different pace and strives to encourage growth without adding pressure. After-all, music is supposed to be fun and not stressful.