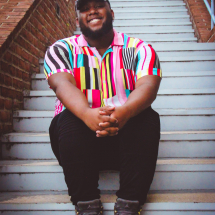 Baritone Davion Adams is a student at Houston Baptist University majoring in both music and finance. His performance highlights include performing the roles of both Figaro and the Count in “Le nozze di Figaro”, and the Judge in “Trial by Jury”. He has also had the privilege of attending an esteemed summer workshop, ‘Lorenzo Malfatti Academia’, in Lucca, Italy where he studied Italian and developed his operatic skills and art songs capabilities.
A native of Houston, Texas, he has competed in the NATS (National Association of Teachers and Students) where he was a semi-finalist two years in a row. He also won 1st place in the GH NATS competition. Davion’s recent accomplishments include his recent 2nd place win in HBU’s ‘Concerto Aria Competition’.
Mr. Adams plans on utilizing his finance degree to work in the arts in the future. He looks forward to sharing his musical knowledge and experience with piano, saxophone, and voice students of all ages and abilities.