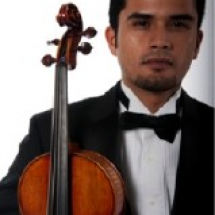 David Pedraza was born in Reynosa, Mexico and started his musical studies at the age of 14 in the OCJM under Jose Vazquez. He later received a full scholarship to pursue a Bachelor of Music degree at the Shenandoah Conservatory. From 2003 to 2005, he was a member of the Youth Orchestra of the Americas under Placido Domingo, Carlos Prieto and Gustavo Dudamel. Also, David holds a Professional Performance Certificate from Lynn University Conservatory of Music and recently finished his Masters of Music degree at the same institution under a full scholarship.

Recently, David performed as a soloist with the Lynn Chamber Orchestra. He has performed in various countries including Mexico, Bahamas, Costa Rica, Panama, Ecuador, Colombia, Venezuela, Brazil, Uruguay, Argentina, Peru, Spain and the UK. He also performed at The White House, the Kennedy Center, the Embassy of Mexico in Washington, DC, the Palacio de Bellas Artes in Mexico City, Teatro Teresa Carreno in Caracas, Sala Sao Paolo in Brazil, Teatro Colon in Buenos Aires and many other international venues. David's main teacher was Ralph Fielding. In the summer of 2009, he studied with Wilfried Strehle, Principal Violist of the Berlin Philharmonic.

David is currently performing with the Vitali Quartet, Palm Beach Pops, Symphony of the Americas and Miami Symphony. He loves to share his musical experiences through teaching and is committed to his students.