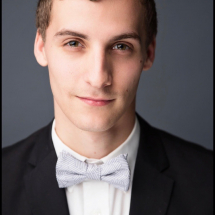 David Ferguson, tenor, is in his last year of his undergraduate degree at the University of Houston under full scholarship earning his degree in Vocal performance. He is active with the Moores Opera House and has performed many roles including, Orpheus (Orpheus in the Underworld), Trip (School for Scandal), and chorus in The Ballad of Baby Doe, The Love for Three Oranges, and Romeo e Juliette.

Outside of the music school, David enjoys singing in Church and was the staff singer for the Cathedral of Our Lady of Walsingham for three years as well as Chorus Angelorum, the professional Evensong choir. Other than church music, David's last engagement was living in Leipzig, Germany and studying at the Hochschule für Musik und Theater "Felix Mendelssohn Bartholdy" as the international exchange student. He also gave a recital and sang for a castle church outside of the city.

David also has a passion for teaching. He started his professional teaching career with Allegro Pearland Academy of Music teaching piano and voice. There, he led weekly lessons and organized recitals for his students.