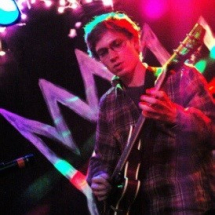 David started playing the guitar at the age of 8, and began taking lessons shortly thereafter. The band he played in with his friends in high school was given the opportunity to open for the first band that he ever saw live, and after that he went on to get a Bachelor's of Music degree in Jazz Guitar Performance from the University of North Carolina at Wilmington, where he also played in several bands, for musical theater shows, and started teaching his first students and feeling for the first time what it is like to be able to help somebody with the same passion as one's self.

His first job out of school was the show band guitarist for Celebrity Cruises. During his three separate six month contracts living aboard ships, David had the opportunity to travel to three continents and over 30 different countries, performing music nearly every single night, often music that the band saw for the first time during that day.

Now permanently relocated to Seattle, David is excited about exploring the city's historic and diverse music culture, and to pass on everything he has learned from his past teachers, real-world experience, and love of music to the next wave of aspiring musicians.