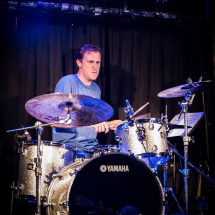 David Agee is a devoted drum and percussion teacher in the Washington, D. C. area. He is equally passionate about both performing and teaching, and possesses over 15 years of experience with all ages and talent levels.

From his earliest memory, David has had music in his soul. He could often be found drumming with whatever was on hand, from sticks and rocks to pots and pans. David felt further drawn to music after receiving his first drum set, and it wasn't long before he decided to dedicate his life to music.

Following his heart, David enrolled at Clemson University where he earned a bachelor's in Production Studies in the Performing Arts under the tutelage of Paul Buyer. During his time at Clemson, he was also a member of the renowned Tiger Band and Drumline, and acted as Assistant Section Leader from 2006-2007. He then continued to DePaul University where he earned a master's in Jazz Studies, studying under Bob Rummage, Joel Spencer and Bob Palmieri. It was also during this time that David had the opportunity to train privately with Peter Erskine and Gregg Field.

Remaining in Chicago upon graduation, David enjoyed performing versatile roles in many genres including funk, zydeco, and musical theater. He was featured on 10 album releases and shared the stage with performers such as Phil Woods, Marquis Hill, and Rob Clearfield. As a sideman, David performed with the Chicago Jazz Orchestra, Glenn Miller Orchestra and Lowdown Brass Band among others. An award-winning musician, he was a recipient of the 2016 Luminarts Fellowship for his outstanding performance in jazz improvisation.

David relocated to Washington, D. C. after winning the drum set chair for the United States Navy Band Sea Chanters in 2017. With the Sea Chanters, he performed for notables such as the Chief of Naval Operations, President of the United States at the White House, and the Fireworks Spectacular with the Boston Pops. Most recently, David has released albums with original projects Faraway Plants, Faraway Plants (2019), and Arcana, the sexxxy xxxmas EP (2018), both recorded at his home studio, Groh Studios. Active on the scene in D. C. and Baltimore, Agee has freelanced with Bohemian Caverns Jazz Orchestra, MW9 featuring Jon Irabagon, performs regularly with his chordless trio Third Rail (Billy Wolfe, Frank Silvestrini) and is the bandleader of District Brass. In addition, David is a proud member of the Vic Firth Education roster and endorses Vic Firth sticks/brushes/mallets and Remo drumheads.

Throughout his years of instruction, David has based his teaching approach on the essential fundamentals of music / drums such as time, rhythm, movement, and style. He also emphasizes hand development through the technique of the full-stroke, establishing a strong foundation in rudimental snare playing and limb coordination, as well as musical growth by means of improvisation. David believes that focusing on these key elements coupled with the personal goals of the student, each player will experience a unique, fulfilling musical development. With a teaching philosophy centered on being patient, he allows students to discover their talent at their own pace and understands that when a student becomes aware of the control that they have over how they play, real success can be achieved.

Above all, David aims to help his students strive for excellence in everything they do, and music is a terrific vehicle to witness those results.