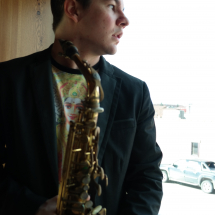 Daniel Rose is a professional Saxophonist, teacher and composer living in the South Miami area. He began playing the saxophone at a young age and his passion has never waned.

When Daniel was 15, he was awarded the Bari Sax chair in the 2008 Jazz Band of America directed by Shelly Berg, a group that performed with Phil Woods and Patti Austin.

Daniel Rose was awarded a scholarship to the Frost School of Music and graduated with a Bachelor of Arts Degree in Jazz Saxophone Performance. After graduation, Daniel worked for Royal Caribbean Cruise Lines, playing lead alto, flute, piccolo, clarinet, and soprano on the Allure of the Seas production of the Broadway hit Chigaco. He was also playing the Lead Alto Sax Chair on the "Liberty of the Seas" and Royal's new premiere Oasis-Class ship, the "Symphony of the Seas".
"It was common knowledge amongst orchestra members that Daniel was the best musician in the band." - Jeff Ellis, Liberty Musical Director