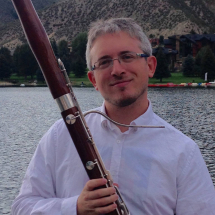 Daniel started his bassoon training at the age of 13 in Jerusalem, Israel where he grew up. He received his Bachelor's degree from the Tel Aviv University where he studied with Mordechai Rechtman and Gad Ledermann. He studied for a Master's degree at the University of Southern California in Los Angeles with Judith Farmer, where he also won the 1st place in the school concerto competition.

Upon graduation, Daniel won the position of principal bassoon with the Israel Chamber Orchestra where he played for 3 seasons before deciding he wishes to focus on teaching as a career, a choice which led him to Boulder, CO, where he studied for a Doctoral degree in bassoon performance & pedagogy with Prof. Yoshi Ishikawa, and graduated in May 2018.

Daniel has performed extensively in the US, Israel, Central and South America, and Europe, and has served as the principal bassoon player of the Arapahoe Philharmonic Orchestra since 2015. He has recorded commercial CD's, and a Hollywood soundtrack.

Are Voice Lessons Needed If My Child Is a Great Performer Already?