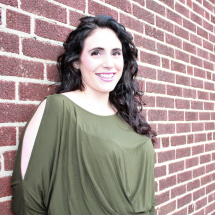 Corey Raquel Lovelace hails from Chicago but has happily made Alexandria her new home. She teaches voice to all levels and abilities as well as beginner piano, and believes music has the unique ability to empower, strengthen and enrich students' lives well into adulthood.

Mrs. Lovelace can't remember a time when she wasn't singing! Even at a young age she was always humming or creating her own songs. Luckily, her parents recognized this passion for music and began involving her in musicals. Her love of music only grew as she became a chorister in the Phoenix Girls Chorus. She then joined band and continued to play the trumpet throughout high school while also singing in competitive choirs.

Mrs. Lovelace's passion for music led her to pursue a music performance degree in voice. She received her Bachelor of Music in Voice Performance from North Park University, followed by a Master's in Music from DePaul University in Chicago, IL where she had the honor of studying under Jane Bunnell. Upon graduating, Mrs. Lovelace had the pleasure of performing in China with the iSING! International Festival in August of 2019. In recent seasons she has performed the title role of Cendrillon in "La Cendrillon" with Little Opera Company of Charlotte, and Mimì in "La Bohème" with Central Piedmont Opera Theatre. In 2018, Mrs. Lovelace received the First Place Award from the Opera Guild of Charlotte's Opera Competition. Past engagements include singing the role of Nanita in Opera Carolina's Opera Xpress production of "How Nanita Learned to Make Flan," and Kate in the staged premiere of "Lost Connection: The Tinder Opera." Mrs. Lovelace made her European debut as a member of the Opera Studio at the American Institute of Musical Studies in Graz, Austria.

Mrs. Lovelace brings over 7 years of experience teaching all levels and styles in voice. She had the pleasure of serving as music director for musical theater summer camps and productions; including "Shrek," "The Jungle Book," and "Sleeping Beauty." What she loves most about teaching is helping a student discover their own voice and style. She has served on voice faculty at the University level as well as in the private studio. Mrs. Lovelace's vocal teaching is rooted in classical technique with strong emphasis on musicianship, allowing her students to sing in a healthy way in the genre they enjoy most.

In addition to teaching voice, Mrs. Lovelace teaches beginner piano. She utilizes the Alfred teaching methods, while also implementing fun and creative games to strengthen sight-reading and music theory skills. As a professional musician she recognizes just how important and rewarding learning to read music can be. Through teaching students to read music, she has found a wonderful way to share her love of music.