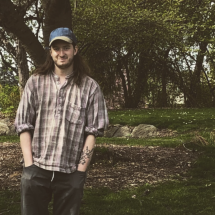 Conor Fortune is a singer/songwriter that teaches piano, drums, vocals, songwriting, music theory, and recording. He is a well rounded musician that has a back ground in multiple genres including rock, pop, jazz, funk, and classical music and has been working as a music teacher ever since graduating from college six years ago.

Having graduated from the distinguished Columbia College Chicago he obtained a Bachelor of Music in Jazz Studies. Conor was top in his class and earned a music scholarship as well. He also had the chance to learn not just jazz but different types of music from his eclectic music program’s ensembles. Some of them including Gospel Band, Latin American Percussion, RnB, Classical Repertory Ensemble and many more.

After moving to Seattle two years ago, Conor started his own band that he fronts and sings in and began playing with multiple other bands throughout the city. While he isn’t playing music he spends most of his time producing and recording music out of his home studio and interning at Sound House Recording where is learning to hone is craft as a producer and engineer.