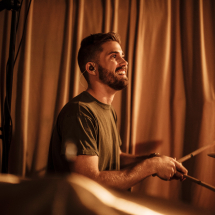 Connor is a born and bred Georgia-native. He first discovered his love for music upon starting piano lessons at age five. From there, after developing a baseline of rhythm and musical knowledge, he began taking drum lessons at the age of twelve and has been studiying and developing his skills ever since.

Through consistent weekly lessons and heavy involvement playing drums at a handful of churches all throughout the Atlanta area, Connor developed his passion for music, skills behind the kit, and found his drumming niche in the worship ministry sphere. After graduating with a Bachelor's Degree in Finance from KSU in 2017, Connor set out on a journey to pursue his passion and make a career in the music world.

Connor began teaching drums and percussion after college and found a love and respect for teaching students of all ages and abilities. He says, "watching students learn to play reminds me we can always learn new things".

Dedicated to continued learning and development, Connor studied under worship drummer, Paul Wittinghill, of Passion City Church. Connor aims to bring an exciting, structured, musical approach to learning the drums at an effective, manageable pace each week and is thankful for the opportunity to instill a love and appreciation for music in his students.

In addition to teaching music, Connor is a contract drummer for a handful of churches, including his home church, First Baptist Woodstock, among others. He plays drums for and manages the private event band "On the Groove, based out of Atlanta, GA.