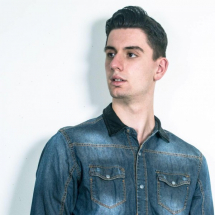 Cole Holland is a composer, producer, and pianist from Seattle, Wa. The realm of music that he works in ranges from hip-hop, classical, EDM, and new age with an emphasis on writing and production for projects in those genres. While working on many projects, Cole is currently completing his bachelor’s degree in music composition at Cornish College of the Arts and is set for graduation in December 2016.

Cole has been playing piano since the age of 3, and composing since the age of 7. In his early years as a musician and pianist, he studied with many teachers, but most notably with Mariya Koshkina at the age of 13, all the way until the age of 18. Between 2008 – 2012, he studied at the Academy of Music Northwest, where he received his core training in composition, music theory, ear training, conducting, music history, and ensemble performance. His instructors included Eric Flesher, Jim Paul, Bradley Hawkins, and Nathan Whittaker.

During 2011 – 2013, Cole won many notable awards as a pianist, such as outstanding performance in the WSMTA Chopin Festival, with honorary mentions and top placement in the Russian Music Chamber Foundation of Seattle, Time Era Festival, Early Music Festival, EMTA Ensemble/Concerto Festival, and others. Cole is currently finishing his composition degree at Cornish College of the Arts, anticipating to graduate in the fall of 2016. During his time at Cornish, he has been under the mentorship of Jarrad Powell as a private instructor, who has worked with John Cage and Lou Harrison, as well as Janice Giteck and other composition faculty at Cornish.

In relation to composition, Cole has written over 400 pieces, in genres ranging from classical, hip-hop, new age, dance, acoustic, and modern rock. From ages 7 to 14, Cole both won and placed in top positions in over 20 competitions including the Washington State Music Teacher’s Association, the eastern province of the Washington D.C Music Teacher’s Association, as well as many other nationally held competitions. Between 2011-2013, Cole had three world premieres performed by the Seattle Symphony at Benaroya Hall, under the mentorship of Dr. Samuel Jones.

Between 2012-2014, Cole worked for OMG Global, where he wrote music for projects with the Trump Foundation, Children’s Hospital L.A, Marriot Hotels, and Randy Ruby Photography L.A. In May of 2015, he founded his own company called MusiCole Entertainment with his family and close friends, where writes, collaborates, and performs his music. His most recent project with MusiCole Entertainment was his debut album titled Hierarchy in 2015. Currently, he continues to release and collaborate on projects with artists across the United States and internationally as well.