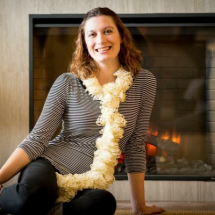 Claire is a board-certified music therapist and private piano teacher in the Washington D.C area. At the age of 6, she began taking piano lessons with the late Rhona Pulman of Springfield, VA and continued lessons until her sophomore year of high school. Claire started playing percussion when she was 10 years old in her elementary school band and started private lessons soon thereafter with Brenda Weckerly, formerly of the US Marine Band. Beginning in the fall of 2001, she was the principal percussionist of the Bishop Ireton High School Symphonic Wind Ensemble in Alexandria for four years. It was because of her high school band director Garwood Whaley that she decided to pursue a career in music performance.

Upon returning back to Virginia, Claire began working as the pit instructor for the West Potomac High School Marching Band and continued in that position for two years. She also was the percussion instructor and section coach at Bishop Ireton High School from March of 2010 to January of 2011.

In the spring of 2011, Claire began studying music therapy at Shenandoah University and received her Graduate Certificate in Music Therapy degree in May of 2013, after completing her internship at Grafton Integrated Health Network, an in-patient psychiatric treatment facility for children and adolescents. Beginning in August of 2013, she began part time work as a music therapist with Capital Music Therapy Services, LLC, a music therapy private practice in the Northern Virginia area where she served children with special needs. Currently, Claire works as a program assistant in the Continuing Care department at Ashby Ponds, a retirement community in Ashburn, VA. She works with assisted living and post acute rehab residents including those with Parkinson’s, Alzheimer’s and dementia. In addition to her passion for music, Claire also enjoys spending time with her family especially her almost 3 year old son Will. She currently resides in Leesburg, VA.