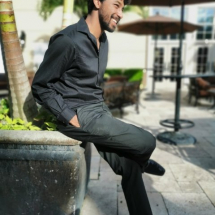 Violinist Christopher D'Avilar has a versatile blend of both performing and teaching the violin. He received his Master's degree in Violin Performance at the Aaron Copland School of Music at Queens college, where he studied under Daniel Phillips. During this time he has had the opportunity to play with opera companies such as the Blue Hill Troupe and the Queens College Opera. He also had the opportunity to perform the Bruch Violin Concerto with the Queens College Chamber Orchestra.

Christopher has also received his Bachelor's degree in Music Education at The State University of New York at Fredonia, where he also had many performing opportunities as well as teaching students ranging from K-12. He has taught in various schools through the Noel Pointer Foundation, where he taught at schools throughout the five boroughs of New York City with no music programs.

Christopher actively incorporates his knowledge in both performing and music education so that he can provide a well-balanced strategy for teaching his students. This includes ergonomic technique methods, expression and musicality, and the ability to play with little to no tension, also known as the Alexander Technique.