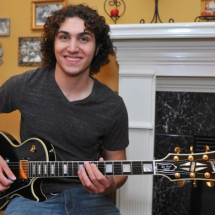 Christopher Tokaji hails from Marietta, Georgia. He was exposed to music at an early age, due to the fact that his father was a guitar player. His father exposed him to guitarists like Stevie Ray Vaughan, Eric Johnson, and Ritchie Blackmore, and bands like AC/DC. At the same time, his mother was also a big music fan, and exposed young Chris to the likes of Aerosmith, Led Zeppelin, Def Leppard and Guns and Roses. "Music always had a presence in our household" says Chris.

Despite all these factors in his upbringing, Chris didn't start playing guitar until his early teen years. He got his first electric guitar at the age of 10, but it wasn't until about the age of 12 that he got serious about playing it and practicing regularly. This was also around the time that entered middle school where he was in school orchestra for 3 years playing violin. Also during his middle school years, Chris took some formal piano and guitar lessons.

Chris was able to inspire himself and his enthusiasm and drive toward the instrument and music in general grew. Practicing no longer was a chore but rather a passion and he would practice for hours. During his high school years, more performance opportunities came his way in the form of talent shows, performing with bands at small concert venues and parties, and church worship band.

Chris is currently pursuing his future goals in the music field. He just graduated on June 21, 2014 from the Atlanta Institute of Music and Media in the Guitar Musicianship Program. He plans to further his education and is researching college programs. Chris structures his guitar lessons on being an inspirational teacher who will provide the basics but allow his students to explore the guitar on their own terms. He wants his lessons to always be positive powerful experience, never boring or tedious. He hopes to instill the passion for music no matter what age group his students are.