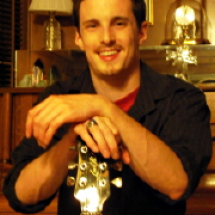 Chris Evans first began his journey into music at the age of six when he heard his first Jimi Hendrix Cd. He has been influenced by many different artists such as Eddie Van Halen, Eric Clapton, Stevie Ray Vaughn, and many more. Chris has been playing guitar for over fourteen years and has been instructing for three. His main genres range from Rock and Roll to Jazz and Blues. He began playing professionally at the age of twelve, playing for three different churches in the Woodlands area as lead guitarist. In addition to his professional work, he also won Houston’s Reach for the Stars talent search in 2008 and gained a small recording contract as a result. In the fall of 2009 Chris became a Group Ensemble Instructor for the national rock camp “Camp Jam”, showing students the dynamics of working together in a band. Throughout the years Chris has broadened his horizons by branching out and taking on both bass guitar and drums. Chris has played anywhere from national shows with various groups such as Houston’s very own Angel and Lost Heroes, to small coffee shops around town whenever he gets the chance. He is currently pursuing a Bachelors in Music and Performance at Lonestar Montgomery College. Chris has taught both children and adults of all levels during his teaching career and uses a very hands-on approach in all of his lessons. Chris believes that everyone can learn to play music from their heart if they set their mind to it.