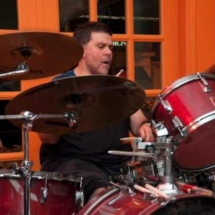 Chris Arminio was born in Newark NJ. He knew at a young age that he loved music. At 13 his first performance was a church play. At 14 he was studying with a young local drummer Dale Trevor. At 17 he was having jam sessions at his home or traveling to neighboring towns to jam with some local musicians. Later he started studying drums with Al Germansky (1st drummer for the Peter Duchin Orchestra) and continued to perform Club Dates and functions.

While still in his twenties Chris moved to Virginia and started studying with Al Merz (a Marine Band Alumni and Percussionist for the National Symphony) while performing in renown venues such as the 9:30 Club, The Bayou and for Washington Project of the Arts events. It was during this time that Al recommended to Chris to go to music school and suggested the esteemed Catholic University of America School off Music in Washington DC. This is where Chris received his formal music education studying Piano, Sight Singing, Music Theory while furthering his studies in percussion learning Marimba Bells, Tympani, etc, and playing gigs at Howard University, The Old Post Office, and Constitution Hall under the baton of Mstislav Rostropovich (world famous Cellist and at the time Conductor and Musical Director for the National Symphony).

After Catholic University, Chris moved back to New Jersey to play with a hard rock band, Blessed Fury, and start his studies with studio drummer and drummer for Steve Via, (Guitar Virtuoso), Pete Zeldman. After getting a developmental deal with the Scotti Brothers the band played a few gigs and then, due to internal conflicts came to an end. Chris at that time was living in New York City playing in city bands and studying with Joe Morello, the drummer for the Dave Brubeck Quartet, an internationally famous jazz band, recording such songs as "Take Five" and "Rhondo in Blue".

After studying with Joe for four years, Chris found himself back in Virginia auditioning for and securing the drum chair for New Potato Caboose--a band that had a recording deal (Rycodisc Records) and was touring the country. After two years of 200 dates a year, Chris left the band, stayed in Virginia, and started to play gigs locally. In 1997 Chris started to teach and study with Tony Martucci, which continued for eight years.

Chris is currently performing and teaching (Drums, any level, Beginner Piano and Beginner Guitar) locally in the DC. Area.