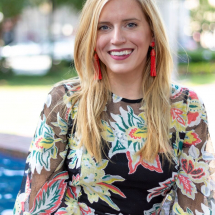 Chelsea Spits, a soprano, earned both her Bachelors and Master's degrees in Music Education from the University of West Georgia. She comes to Florida by way of Atlanta, Georgia, where she started her career in teaching and performance. Her most treasured roles include Papagena (The Magic Flute), Elvira (Don Giovanni), and Meg (Damn Yankees). In 2011, she was awarded the prestigious Wright's Scholar award. She also founded her collegiate a cappella group Shades of Red, and carried the group on to a professional level once she completed undergrad, performing at Atlanta festivals and the Great Georgia Air Show. Another highlight for Chelsea was her time competing as Miss Paulding County in the 2017 Miss Georgia. She performed with the Atlanta Symphony Orchestra Chorus (2016-2018) at the Kennedy Center in Washington, D.C. for the SHIFT Festival and debuted as director with The Oak Theatre Company in Atlanta when she produced the musical Little Women. Additionally, she has appeared as an extra in TV shows such as Drop Dead Diva, The Vampire Diaries, and made a brief appearance in the movie Pitch Perfect 3.

In addition to performing, Chelsea has taught high school for over 8 years in Metro-Atlanta and Metro-Orlando. Her past class types include traditional choir, show choir, vocal jazz ensembles, general music classes, guitar, keyboard, and AP Music Theory. She has taught private studio lessons on and off for the last decade. She specializes in teaching private voice and piano lessons, All State audition prep, AP Theory Exams, college and professional audition preparation, classical repertoire, and serves as a musical theatre vocal coach. Her prior students now attend colleges such as the University of Georgia, University of Tennessee, Barry College (GA), Georgia Southern University, Belmont University, and some of her students have stretched their wings as far as New York City.

When Chelsea is not working with her students or performing, she enjoys spending time with family and friends, and exploring all the theme parks Orlando has to offer.