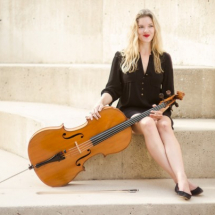 Drawing influence from all kinds of music, DC-based cellist Carol Anne Bosco plays with a style that is eclectic and diverse.

As a classical player, she has performed in professional, school, and festival orchestras including the McLean Orchestra, Tallahassee Symphony Orchestra, the University of Maryland and Florida State University Orchestras and Operas, and the Hot Springs and Miami Summer Music Festivals.

Her studies in chamber playing have taken Carol Anne as far as France, participating in festivals including the Wintergreen Summer Music Festival, Duxbury Music Festival, and the American Conservatory in Fontainebleau.

She has performed at the New World Center in Miami, venues in DC which include the Black Cat main stage, the Velvet Lounge, and the Dunes, at various venues in the French Quarter, Uptown, Marigny and Bywater areas of New Orleans, in art pieces featured at the Corcoran, as well as for other exhibitions in galleries around DC.

As a music educator, Carol Anne also teaches piano, in addition to cello. She started her musical journey on the instrument as a child and studied privately for several years. At UMD, she also completed piano course work for general piano studies and works with beginners through early intermediate students. Her basis for instruction is rooted in positive reinforcement and using the piano as a gateway to a vast array of musical instruments and styles. She is one of Lessons In Your Home's young beginner specialists, and especially works with students in the 5 to 10 age ranges.

With both cello and piano, Carol Anne has a great passion for delivering quality, customized music education that uplifts the individual and provides an outlet for creativity.