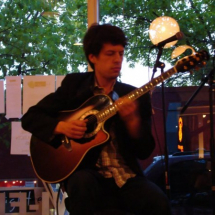 Carl Germain was born in Madison, Wisconsin in 1986 into a family full of professional musicians. He began taking classical piano lessons at the age of four and continued for 14 years, performing all around his hometown. In the fourth grade, he followed in his parents footsteps by picking up the violin and playing in the local school orchestra.

As a young teenager, Carl also began playing guitar, which he now considers his main instrument. He quickly taught himself to play, primarily focusing in rock, and began writing songs. He has extensive experience as a musician in the recording studio, on stage, as a band leader/ director, and sideman. He also studied gypsy and blues jazz guitar with his sister Nora, a jazz violinist, and recorded a cd with her in 2009. In addition, he studied classical guitar and performed all around college. He has 13 years of experience playing in various groups of all styles all over the US and beyond, playing electric and acoustic guitar, bass, drums, and keyboards.

From 2009 to 2010 Carl attended three Guitar Craft courses with Robert Fripp (lead guitarist of King Crimson) in the US, Spain and Italy. In Italy he performed improvised music with over 70 guitarists with the Orchestra of Crafty Guitarists III. Upon returning to the US, Carl moved to Seattle in the summer of 2010, and joined the prominent Seattle guitar ensemble called Tuning the Air for two seasons, performing weekly. Carl also holds a BA in philosophy at Beloit College in Wisconsin, and studied audio production at the University of Washington. He has worked as a sound engineer for live shows and is experienced in guitar restoration and electronics.