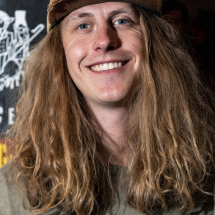 Caden Kramer has been a lover of music for as long as he can remember. His journey as a musician began in elementary school with the saxophone and later the guitar, but it wasn’t until 2010 that he picked up a bass guitar and found his true role as a musician. He had met some friends that needed a bass player for their metal band, prompting the switch, and has been playing ever since.

Caden later graduated from the University of Colorado Denver with a Bachelors degree in performance on the bass guitar. During that time, he also received lessons on the piano which he would now consider his second instrument. Caden has performed in many ensembles including jazz and latin bands, as well as original metal and blues bands, but now preforms regularly in his current band, Sqwerv.

Caden believes that playing music is a skill that goes beyond just making beautiful sounds. It can translate into learning life lessons such as patience, persistence and creativity . It is important to Caden that his students not only learn how to play their instrument but also learn the fundamentals of listening and hearing music as a language. Caden is eager to share what he has learned through playing as well as his unique perspective on music with students of all ages.