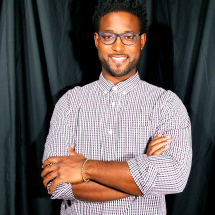 Burdett Rice has been creating music and performing since his teens. He began taking piano lessons at the age of 7 under long time St. Louis Music Director and Composer, Joseph Price. In his college years, he performed with the Opera Workshop at the University of Missouri-Columbia where he performed with the traveling company of the University of Missouri commissioned opera, “Corps of Discovery” and the premiere University Chorus.

Having completed a bachelor’s degree at Mizzou, studying music composition of classical and jazz, vocal performance and music theory, he went on to compose music in jazz, R&B and gospel for choirs and artists in his hometown of St. Louis, MO, including his own band, Juanita Place who met regional success being featured in publications including DELUX magazine, Riverfront Times and was a favorite on college radio stations.

In addition to teaching music, Burdett is an Instructor of Capoeira (Afro-Brazilian martial art) with Capoeira Maculelê Decatur, and he continues his music career today writing and composing songs in R&B, Hip Hop, World and Contemporary Classical music genres for various artists and companies.