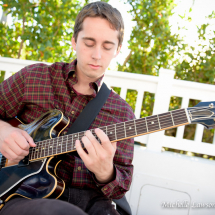 Originally from the D.C. Area; Bryan Dubrow is a guitarist, composer, and music educator. He has been playing guitar since the age of 9, and has performed in venues across the country as well internationally. Bryan recieved a Bachelor of Music Degree from The University of Miami's Frost School of Music where he majored in both Jazz Performance and Economics. Since graduating, Bryan has worked as a professional performer and educator in Miami.

Bryan currently performs with a number of groups spanning a variety of musical genres, including his own trio and quartet, American Darling Valve (singer-songwriter duo), and the World Peace Ensemble (jazz, rock, pop, hip-hop, world music). His work with these groups, as well as with ensembles at the Frost School of Music, have taken Bryan all over the world. He has performed at the Jalisco Jazz Festival in Guadalajara, Mexico; the historic JazzKeller in Frankfurt, Germany; Monterey, California as well as numerous venues across the East Coast.

In addition to performing, Bryan is an active composer. His diverse compositions are performed by his numerous groups, and are featured on official releases by American Darling Valve and The World Peace Ensemble. Bryan also arranges music for big bands and has several charts available for purchase.