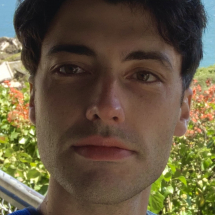 Brock is multi-instrumentalist/songwriter/producer based in Seattle. He began his musical journey with a driving passion to learn guitar, inspired by the many genres of records he collected as a teenager. He loves all genres of music, from classic rock, desert blues, jazz, r&b, pop, hip hop, folk, etc. and is knowledgable about many musical artists. He spent time practicing on his own and establishing himself as the go-to guitar guy in his local community.

In his 20’s, Brock began touring in bands and became a session lead guitar player for many local artists such as Rose Windows. To further his studies, Brock continued his training under classical guitar instructor, Patricio Contreras at Seattle Central College. Brock also has an undergraduate degree in English Literature from the University of Washington which he decided on because of his love of sci-fi books, and his history with writing poetry, stories and song lyrics.

Musically, Brock produces and writes his own songs, from classical guitar, R&B, folk, rock, and modern pop. As a teacher, he specializes in the creative journey for students by giving them the correct tools and guidance in order to achieve their goals in a fun and creative environment. His lesson goals are to show students that music can be a fun and creative outlet and to inspire them to practice and grow as an artist.

In his spare time, Brock loves to snowboard, watch movies, go swimming and camping. He also owns a cat named Avocado and loves/is comfortable around all animals!