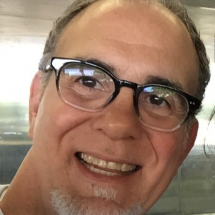 Brad Robertson grew up in Oklahoma and it is where his musical journey began. At 12 years old, his parents gave him his first snare drum as a Christmas present. Brad played nonstop for weeks and soon began to take lessons. He joined band during his next semester and won "Most Improved Musician" among 7th graders. He played drums throughout middle and high school, playing with friends, for the church and at summer camps.

In 1983, Brad joined Young American Showcase: a company out of St. Petersburg, Florida, whose sole purpose was to put together and send bands on tour. At 17, he spent a year touring the North American continent as a drummer for the band "Freedom Jam". When he returned to Oklahoma in 1984, he immediately landed a salaried position as the drummer for a popular local band called "Phil and the Blanks."

Brad moved to Dallas, Tx in 1987 where he became the drummer for "Shallow Reign" and recorded several demos and one full length album. In 1991 Brad signed with On Dragon Street Record where he recorded two full-length albums with the band "The Moon Festival."

In 1996, Brad stepped out from behind the drums, and tried his hand as a guitarist, singer and front man of the band "Three on the Tree" and recorded one EP. Around this time, Brad made a decision to go back to school and study voice.

In 2000, Brad went to the University of Texas Arlington as a Voice Performance major and took Voice Lessons in the studio of notable opera singer/voice teacher Burr Phillips. Brad continued to pursue his degree at The University of North Texas where he majored in Music History and Literature with a Concentration in Voice. During his time at UNT, Brad took part in the Collegium Musicum where he performed his first role as Bacchus in Purcell's Timon of Athens. Brad also studied voice with Dr. Jeffrey Snider. While attending school at UNT, Brad participated with the local community theatre and played the role of Antonio in Gilbert and Sullivan's The Gondoliers.

In 2003, Brad moved to Seattle after graduating college and became the front man for his very own band, "Countrycide." He recorded a full length album consistently played shows over the next 10 years. In 2008, Brad took a job as a music teacher for a local private school and taught voice, guitar, drums and piano. Brad is currently playing drums with his band "The Wayside" and working as a Music Therapist at Aegis Living Retirement Community.

Brad prides myself on being a teacher who can bring a WORLD of music to his lessons -- all while having a total blast!