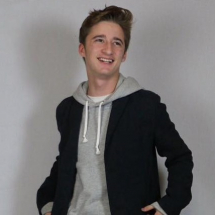 Benjamin Shmidt has loved the cello since he was six years old, and has developed into a passionate performer under teacher Mara Finkelstein. At the age of thirteen, he won the prestigious David Tonkonogui Memorial Award, and fulfilled a unique cultural role in the Seattle area by performing music from the Holocaust. As a soloist, he has performed at stages such as Benaroya Hall, with numerous members of the Seattle Symphony and the Music of Remembrance ensemble. He has also tutored younger cellists throughout the city for years, bringing a fun, individualized, and rigorous plan of attack for every lesson.

During Benjamin’s tenure in the Seattle Youth Symphony Orchestra, he distinguished himself as a talented, dedicated and serious young musician in performances of Mahler’s Das Lied von der Erde, Brahms’s Symphony No. 4, Debussy’s La Mer, Shostakovich’s Symphony No. 5, Mussorgsky’s Pictures at an Exhibition, and works by Wagner, Kernis and others. In addition, as a member of the Seattle Youth Symphony, he has worked under the batons of Gerard Schwarz, Ludovic Morlot, and Dale Clevenger.

Ben is an extremely disciplined and focused musician and distinguishes himself by possessing the technical ability and intuitive musical intellect necessary to adapt and adjust to changing musical inflections. In addition to his exceptional work as an orchestral and chamber musician, Ben’s attractive and engaging forays into digital sampling and electronic warping demonstrate an unusually inquisitive mind and a strong desire to explore the musical landscape in a more holistic and copious way.