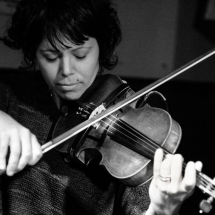 Barbara is a musician that recently moved to Seattle from Italy. She started learning violin at young age. Her grandmother was a piano teacher and she has always been surrounded by music and musicians. She attended the Conservatory of Milan between 1992 and 1995, graduating in Music Theory and Complementary Piano. In those years she also sang in the choir of La Scala Theater in Milan, performing several operas and concerts.

In 2014, Barbara met an American songwriter touring Europe, and decided to quit her job and start playing music again joining his band. She got her violin back in shape, purchased a new piano, and re-learned how to play. She picked up acoustic guitar and bass, and started learning drums. Since 2014 she has performed and recorded with several artists both in Europe and the US. She really enjoys playing live concerts and she believes music has the big power to heal souls, connect people, change people and make them better. Music speaks an universal language that anybody can understand. She believes that technique, theory and practice are basics in learning music and you need all of them for being a good musician. But then what makes you a great musician is the passion and the heart you put in it rather than being a perfect executor. Music is art!

Her big influences are classical music and musicians as Neil Young, Townes Van Zandt, Johnny Cash, and a lot of mostly unknown incredibly talented songwriters. Her favorite thing is playing guitar around the campfire.

Barbara is fluent in English and Italian. When she is not playing or practicing, Barbara enjoys traveling, hiking, reading and cooking.