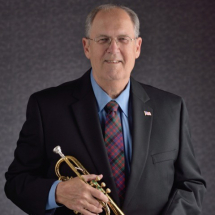 About B Glenn Ledbetter

In 2009, after careers in oceanography and real estate, Glenn began giving private trumpet lessons in students' homes. They have ranged from a 3rd grader to a 81-year old. Whatever their needs and goals, Glenn's motto is simply "Become your best!" In helping them achieve that, they have fun learning and appreciating music.

His approach is first to determine the student's purpose, goals, and objectives. He finds out the types of music they enjoy and what first attracted them to trumpet. Next, he determines his/her current performance level. All that information enables him to customize the curriculum, selecting certain instruction books suitable to the individual student. Then he begins instruction to take the student to the next level and beyond.

His success as a tutor led to his hiring as a para-professional teacher of beginning brass at Skyview Middle School in Bothell. In September 2017, he began his seventh year there. He has conducted the sixth-grade bands at two concerts. In spring 2014, he taught trumpet sectionals in the Symphonic Band and Wind Ensemble at Inglemoor High School in Kenmore.

As for trumpet performance, Glenn was a band scholarship student as an undergraduate at U.W. He marched at football games, in the Tournament of Roses Parade, and at a Rose Bowl game. He played in pep band at basketball games, a brass ensemble, and a jazz band, as well as in orchestras for musicals and opera. In high school, he was a member of the Texas All-State Band. Now he's a member of the U.W. Husky Alumni Band, and Bugler for the VFW Post 1040 Honor Guard, playing at about 150 military funerals and ceremonies. Finally, he currently plays in a 20-piece church orchestra in Lynnwood. He frequently presents trumpet shows at retirement communities.

Initially, the satisfaction and gratification he has gained from teaching trumpet surprised him--- he found out that it is great fun helping students learn and develop! In turn, they give him cheers. It's a joy.