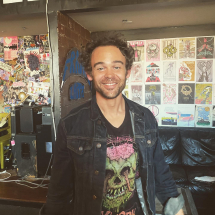 Art attended and graduated with a degree in Guitar Performance from the Musicians Institutes Guitar Institute of Technology in Los Angeles, CA. There is he studied with the likes of Scott Parker, Tom Kolb and Al Bonhomme. He studied extensibly with Chas Grasamke.

Performing has always been natural to Art. He’s performed and toured the United States and well as tours and performances in 13 countries including Sweden, Spain, Germany, France and Belgium. Art made his professional career with music acts Midnight Empire (2011-2013) and Dellacoma (2014-2017). With these groups he shared the stage with Def Leppard, Slayer, Black Label Society along with many other bands. Art always recalls his favorite experience of opening for Def Leppard in Wisconsin at Rock USA.

Art enjoys teaching students of all ages and abilities and has been teaching since 2001. He loves teaching Funk to Finger style to Metal and everything in between.