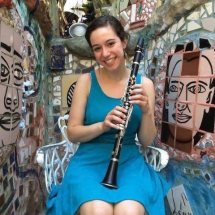 Anna grew up in the Philadelphia area, where she started piano at age 7, clarinet at age 10, and saxophone at age 11. While in high school, Anna participated in the Philadelphia Young Artists Orchestra, Woodwind Chamber music at Settlement Music School, and soloed with the Quakertown Community Band and the Jenkintown Community Band. She graduated from Ithaca College in New York in December of 2015 with a Bachelor’s Degree in Music Education and Music Performance (clarinet), and she was named the Presser Scholar for being the most outstanding music major in her grade. While at Ithaca, she played in the Ithaca College Symphony Orchestra and Ithaca College Wind Ensemble, and she performed at Lincoln Center in New York. Anna also played the alto saxophone in pit orchestras and jazz bands, and she accompanied many choirs, instrumentalists, and vocalists on the piano.

In January 2016 Anna moved to Miami, where she is the Band Director at Plantation Middle School and teaches lessons. When teaching, Anna loves to arrange music that specifically caters to each student’s interests. She also loves arranging and playing duets with her students.

Besides teaching, Anna’s other interests include hand bells, vocal improvisation, and Ping-Pong.