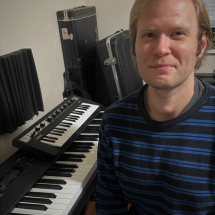 Andrew Cox is a lifelong musician. Primarily a teacher of Guitar, bass, and piano, Andrew has a vast musical history. Coming from parents who were both professional classical musicians, Andrew got started at an early age playing piano. His parents got him involved with a music studio that prepped him for recitals and competitions for young musicians. In Middle and high school, Andrew received private instruction on French Horn, which then led him to play with many bands and youth orchestra’s and other small ensembles throughout high school. In college, Andrew received a bachelor’s degree in Psychology, but took many music courses and was apart of a few college choirs.

Andrew also follows his passion for Rock music, whether it is playing/performing, writing, or recording. At an early age, Andrew developed an obsession with guitar. Having the urge to create music, Andrew taught himself to play guitar during early high school. Much of Andrew’s leisure time was spent forming bands and making music with his peers. After college, Andrew moved to Seattle where he has been apart of a few different bands, weaving himself into the fabric that is the Seattle Rock community. Andrew has recorded albums, both in studios and on his own, toured, and has played countless live shows.

Professionally, Andrew has worked in many different areas. Upon first moving to Seattle, Andrew spent nearly 10 years working in the Social Services, particularly working with kids and young adults who were either traumatized or handicapped. Much of this work revolved around teaching, anything from life skills to school subjects. This led him to teach in different schools, in homes, and in the community. Andrew was also a part of a program that successfully transitions young adults with handicaps into the professional world by helping them to get jobs, and other resources. Being a musician, Andrew often taught music to his clients and used music in various therapeutic ways. Andrew was also a teacher in an alternative school, as well as having taught with a company that teaches classrooms of kids how to code. Often being called a natural teacher, most of his work has involved teaching, whether more traditional or more alternative, Andrew has the skills to teach and loves to pass on knowledge to his students.

In 2018, Andrew made the jump over to teaching music full time and has not looked back. Andrew teaches both groups and private instruction, as well as being involved with putting on musical productions for a music school he’s worked for. Andrew has also got the opportunity to form bands with students of the school where he gets to share his passion for rock and roll. These days, you will find Andrew teaching and going to school for a degree in Audio Engineering. In his Leisure time, you will find him creating music and gigging throughout the Pacific Northwest.