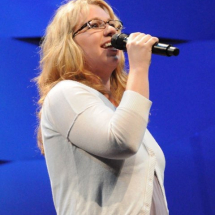 Education: Bachelor of Music in Voice

Andrea Erskin knew music would always be in her life when she started picking out and singing harmony on her own at 10 years old. Her passion for music grew and she began piano lessons, did musical theatre, sang solos and played piano at church. Andrea also has very musical family that has their own family song composed by Andrea’s father who also has a music degree.

During college, Andrea performed as a soloist in various opera workshops, The Messiah, the university choir and at church. She also had the opportunity to perform several times with the Knoxville Symphony Orchestra in Tennessee as a choir member and in a small ensemble. She continued to take private piano and voice lessons during her entire college career, really expanding her musical knowledge that she uses in teaching today. Andrea has a Bachelor of Music degree in voice from Carson-Newman University and began teaching voice lessons before she graduated and knew this was the next step for her.

After college, Andrea was invited to be a soprano in a Los Angeles based choral group called the Musica Sacra Singers. She also became one of the worship leaders at her church which did rock-band style music and also became the handbell choir director. She also taught music classes at a local preschool and choir to elementary aged kids while she continued to teach private lessons.

Andrea loves helping musicians get ready for auditions and performances. Whether it is a school talent show, karaoke night or a college music audition, Andrea has great tips and tools to get you performance ready and have fun at the same time.


Bachelor of Music in Voice